Moving Out Of San Antonio-Week 4

This week, we are moving out of San Antonio. We close on our current home with the buyer on Friday morning. We are very excited to leave the big city but we were hoping for utilities when we did so. It may be a very long wait.

On Monday, two contractors worked out on the farm. They put up a fence around the shed so the dogs would not run off. Then they put grass down inside the fenced in area. They also started putting the fence up by the road.

Back at home, several of us packed and packed. We hired three movers for three hours to move most of the heavy stuff out of the house and into a storage shed until the house is ready. We did this by getting a U-Haul. Those three hours flew by and when it was all said, most of the heavy stuff did get moved except for some dressers, a love seat, washer, and dryer, and some tables and chairs.

In the afternoon, we loaded the U-Haul with things we are moving out of San Antonio. Once it was loaded, we took a bunch of things down to the farm and unloaded them. Then we turned the U-Haul in, thinking we were done with it. 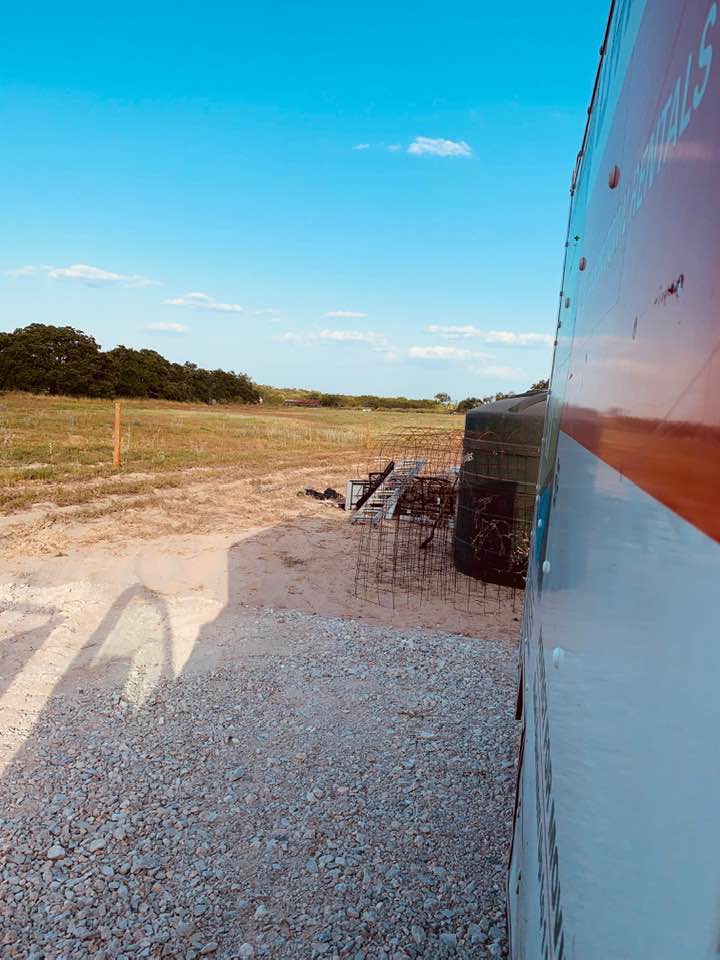 One of our U-Haul trucks down on the farm while we were moving out of San Antonio.

Today is the day the manufactured home people said they would set up our home. The day came and went and nothing. Around lunch time, I called our contact person but got no answer. I left a message but still received no answer. As I type this, it is 9:51pm and still no response from them.

We went to the farm this morning to deliver some items. Two contractors were there working on our front fence. Our son, Matt, was there watering the new grass so our dogs will be able to use the facilities on it. We had to be back at our house by 1pm to wait for a freight driver to pick up a defective generator we had ordered. We were given a window of between 1pm and 5pm. Of course, he showed up at 4:59pm.

In the meantime, we got another U-Haul and loaded it up to take to the farm. After the freight driver came and left, we took off for the farm. The air conditioner was up in the green shed as well as one in the barn. They were both working nicely off of a generator. The fence and gates are all up across the front of the property. The house still was clearly not put together. How disappointing. 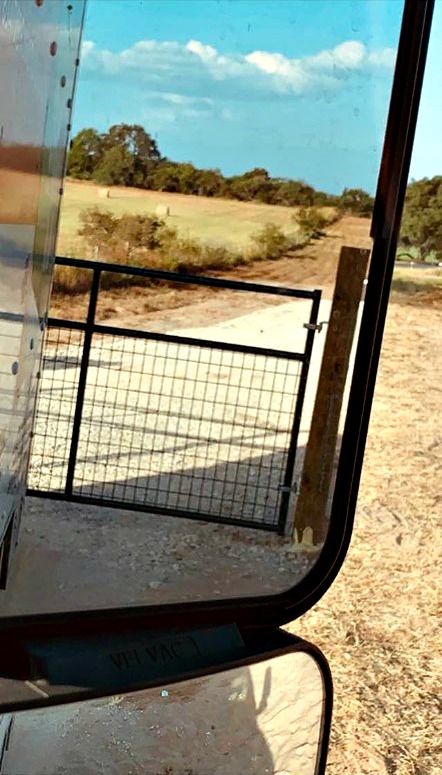 Our front gate is seen through the U-Haul mirror as we are leaving the property. 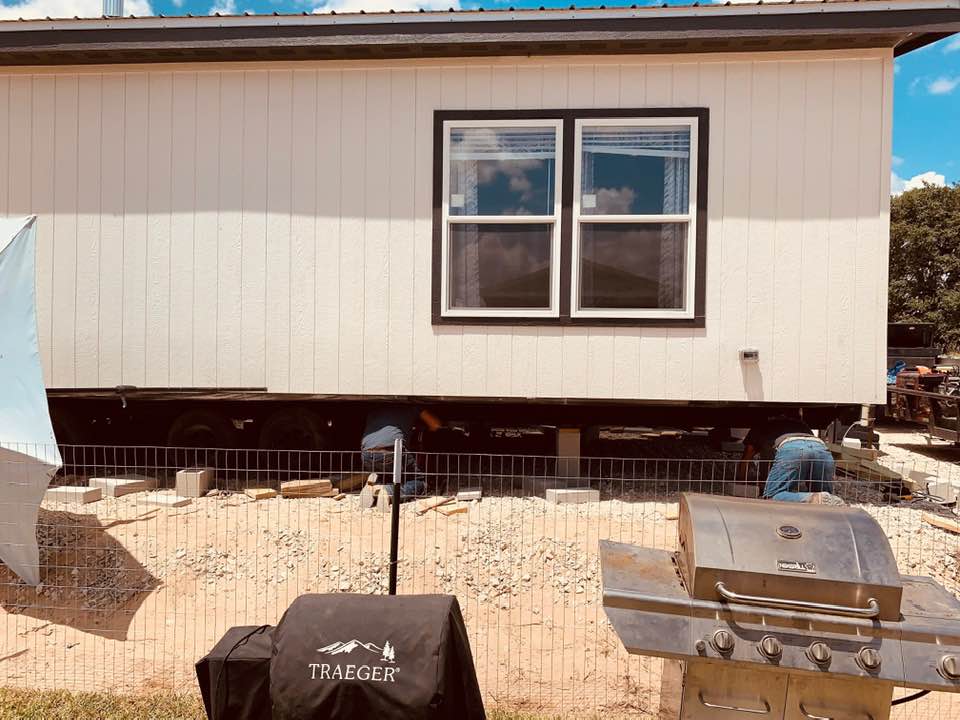 The team is taking the wheels off of the house, leveling it, and putting it on bricks.

Today, the team who takes the wheels off of the manufactured home and puts it together and on blocks finally arrived. By 6pm, they had one side on blocks.

Our contractors fixed the shed up more while we continued to pack up our home and take things to storage.

We finally finished packing and taking things to storage and to the farm, except for some cleaning supplies. I cleaned and vacuumed the house but could not mop as my mops were packed by someone and taken when I wasn't looking. The kitchen floor does not look good.

Down on the farm, the team from the transport company continued to try to get our home on blocks and get both pieces together. At 7pm, they gave up and left so now they have to come back tomorrow for a third day! I realize the heat zaps a lot out of us all, but three days? 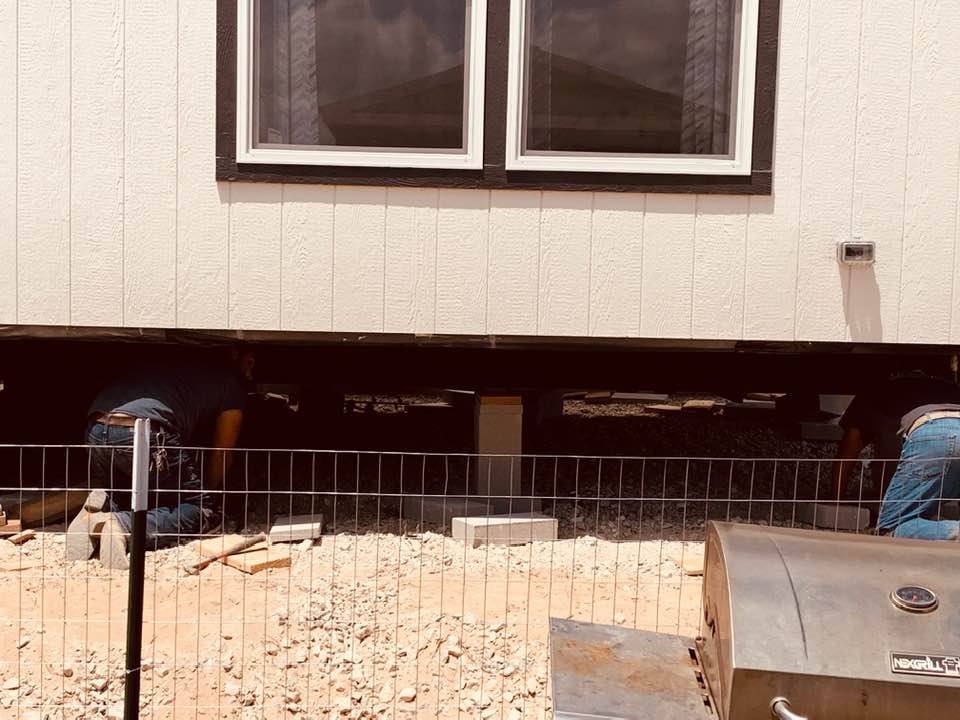 A closer look at the team leveling our new home on bricks. It took them three days to complete. 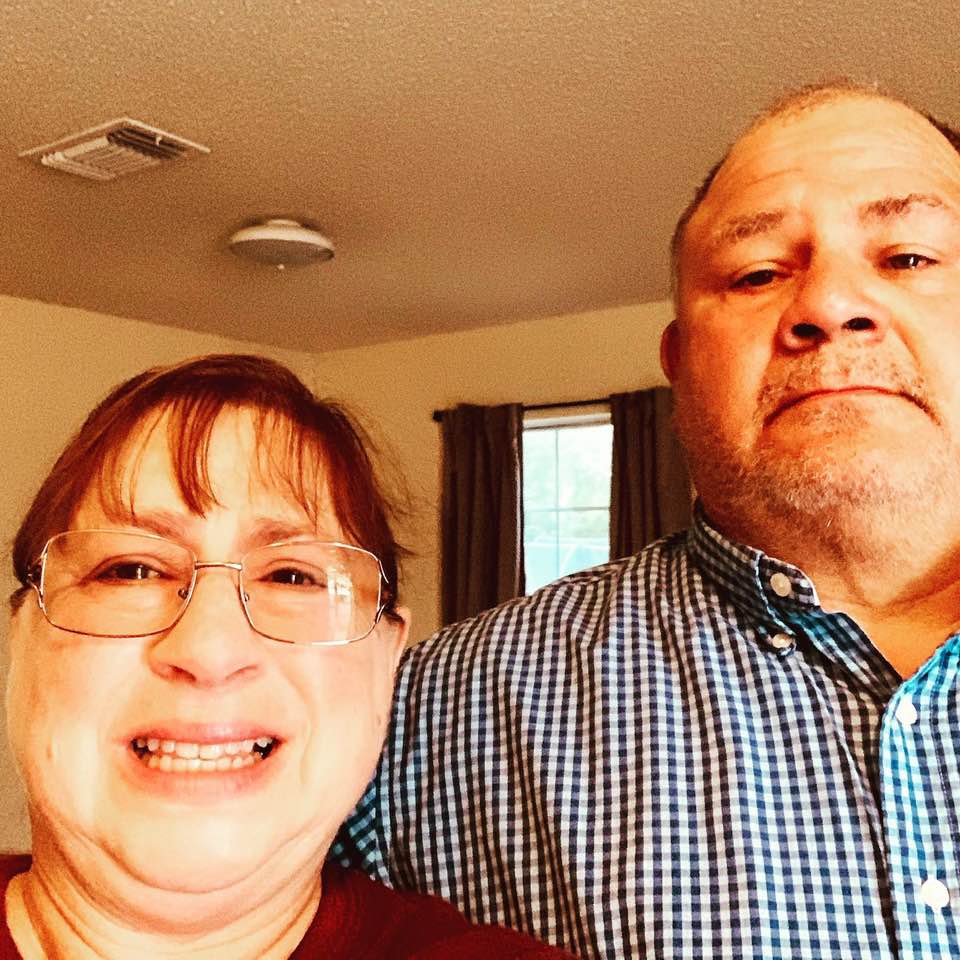 David & Juanita in their empty home of 18.5 years. It is hard to say goodbye. So many memories and good times.

This morning, we said goodbye to our old house of 18.5 years and signed the papers to sell it to the new buyers. I am glad to be moving out of San Antonio and into the country where traffic is a bit slower but so is time.

Interestingly, our original closing date was Monday, August 26, but the buyers insisted it be today instead as they were going out of town on August 26. Now they won't sign untl Monday.

It was very hard to pack and leave our home. I cried a lot. It wouldn't be so bad if we had a nice home to go to but the two halves still aren't together and today is the third day the team has been working on taking off the wheels and leveling the manufactured home on blocks and putting the two halves together.

Once the home is finally put together, a visit by trimmers to put the house together on the inside will have to be made. They told us at closing it could take 45 days.

We will spend our first night out at the farm tonight and will have our three dogs and our cat, all in a 10 foot by 20 foot shed. Fortunately, there is a small air conditioning unit powered by a generator now. We still have no septic tank, no water (except for the water tank we had to purchase and fill), and no electricity. Thankfully, at least David has rented a portable potty and the contractors moved it closer to the shed for nighttime potty convenience.

When we arrived on the farm today, the men were still working on leveling the home. They finished about an hour after we arrived and the one in charge asked if I would like to walk through the inside. 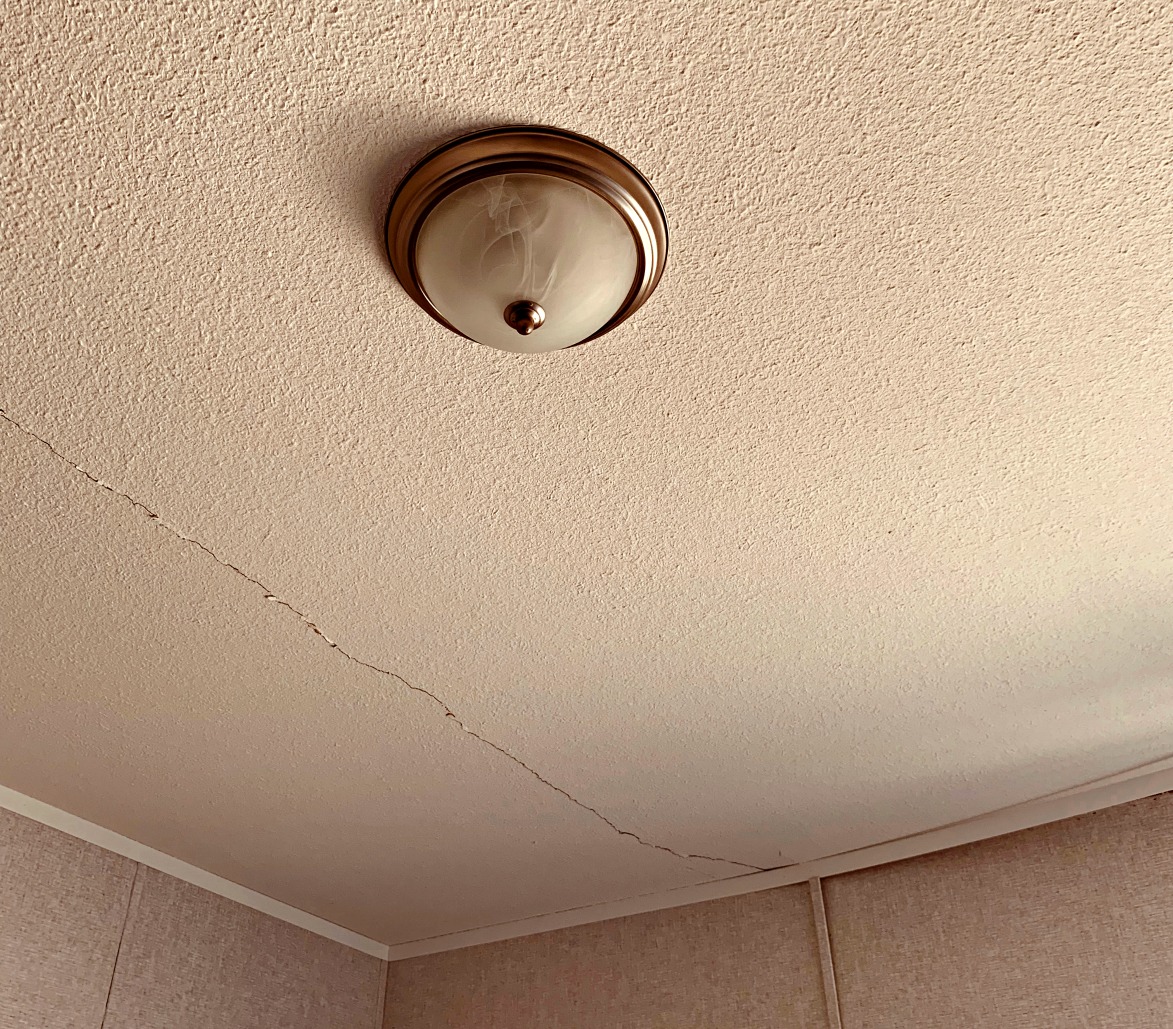 A cracked ceiling in one of the bedrooms of our new home will need to be fixed.

I walked through the home and there is a lot of work to be done. One of the bedroom ceilings is cracked all the way across. One of the mirrors in the jack and jill bathroom fell and smashed into a thousand or so pieces all over the sink and the floor. There are other minor cracks and things to be fixed but that was the brunt of the damage. Let's see, 45 days from now puts us in the middle of October. I wonder if we will have water and electricity by then? Maybe moving out of San Antonio wasn't such a good idea. 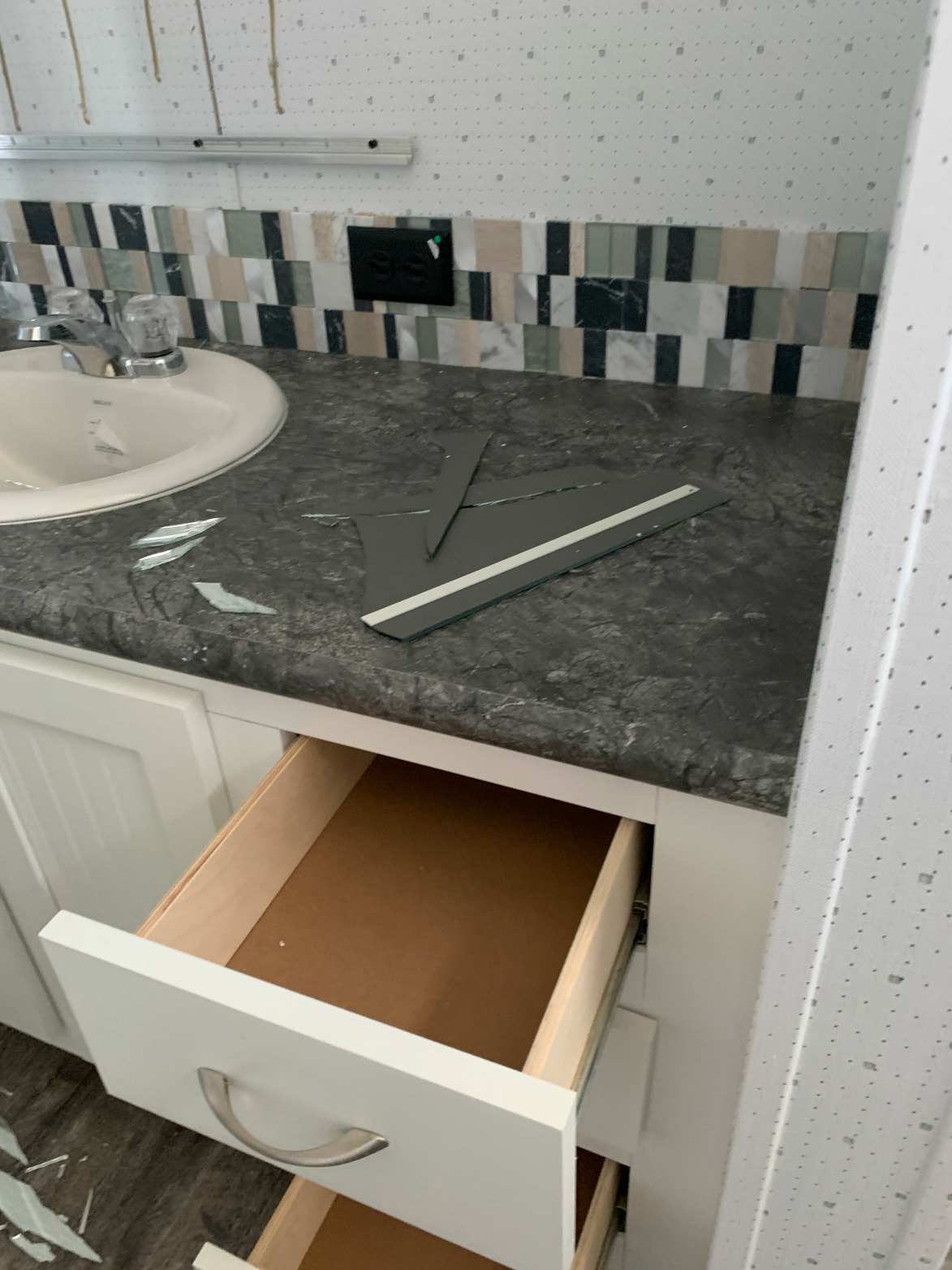 You can see the lines of glue on the bathroom wall where the mirror was until it fell off and broke during transport while moving out of San Antonio. 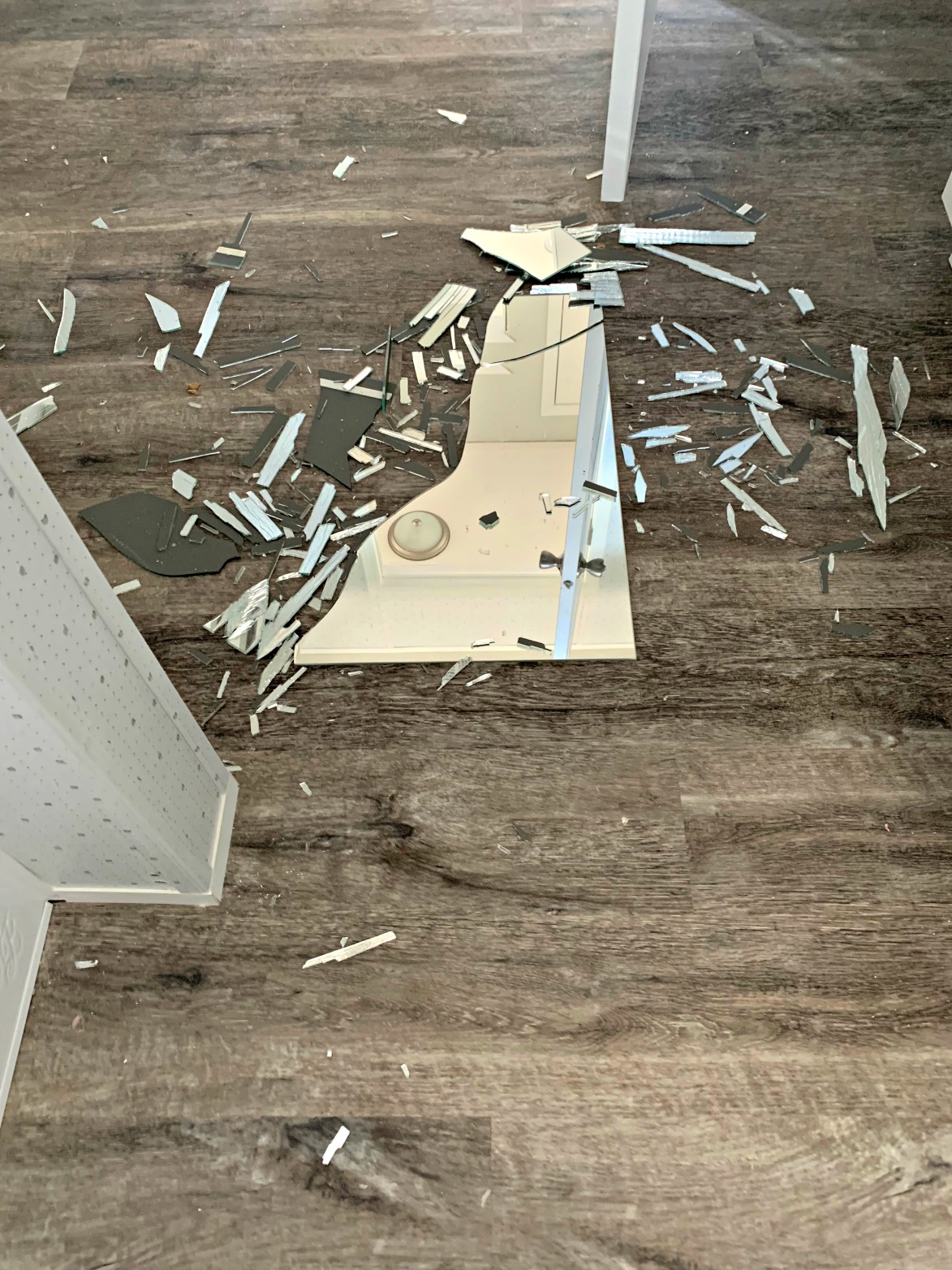 The broken mirror is in a thousand or so pieces all over the bathroom floor due to transport of home when moving out of San Antonio. 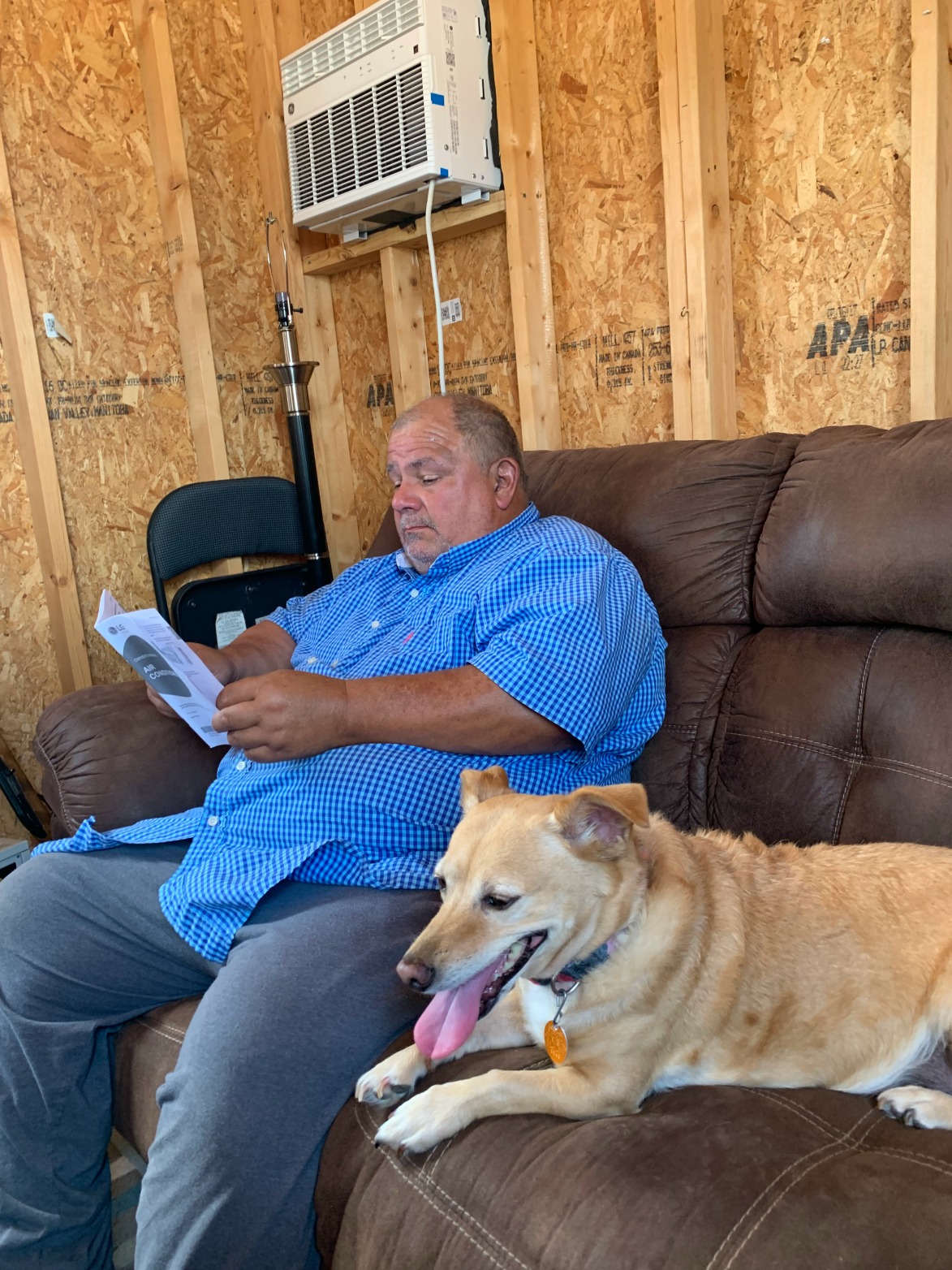 David & Ethel on the couch where we slept in the uninsulated shed. Note the portable A/C unit above David's head, running with a generator.

After one of the hottest, most miserable nights of my life, Saturday started way too early. A bar in the back of the couch poked me all night long and I could not get comfortable. The dogs took turns sleeping on me and next to me and I guess they did the same thing to David. I had to go to the portable potty only three times. The first and second times, the stars were so bright and pretty, something you don't see in San Antonio because of the city lights. The third time, there were no stars. The sky was overcast around 3am.

The plan for Saturday was to set up our above ground pool and then wait for the internet company to bring a satellite dish and get us hooked up. We got up before 7 and gathered all of the parts of the pool. The heat just pounded down on us, making us move slower than usual.

We finally got all of the pool parts laid out and after a few hours, we got it all put together. It was hard work in the heavy heat and we were drained by the time we finished. We drove into town, about 11 miles away for some much needed food and drinks. At this point, we were drenched with sweat because of the heat and humidity. David went into a parts store and picked up a few things and then we went back to the shed.

The internet person was supposed to show up between 2pm and 5pm and then it was going to take another two to three hours for installation. The generator was going and the air conditioner was going, but it just wasn't enough. Somewhere around 3:30pm, my husband called the internet company to change the date to Monday, August 26 for installation. I packed a few things and the six of us hit the road for San Antonio. So much for moving out of San Antonio!

We dropped the four animals off at work and checked into a hotel where animals are not allowed. The first thing we did was shower. Then we went to eat some real food. I had not had a decent meal in days and I was starving. The hotel has a small bar and grill so we ate there.

After eating, I had the joy of lugging two large, dark green trash bags full of laundry to the second floor to wash and dry. There were three washing machines, all vacant. I sorted the laundry into three piles and had them going in no time. The only problem was the room had no chair.

While I did the laundry, David napped in our room. I know he was tired and not feeling well. I was in pain all over but I kept on doing the laundry, going back and forth from the laundry room to our room as different pieces of laundry dried. It took me a little over two hours to get it all done. Then I collapsed on the bed for a short while, wishing that we were not moving out of San Antonio because we have to wait so long to get into the new house with power and water.

Soon, we had to leave to go to work and let the dogs out for the night. Then we went back to the hotel, grateful for the air conditioning and a soft bed.

The alarm went off at 6am. I was so tired but we got up, got dressed and went downstairs for a good breakfast, then off to work to let the dogs out and to feed them all breakfast. We worked on our computers for a short while, then we rushed off to early service at church.

After church, we worked for about five and a half hours at our business, with the dogs and cat. I was starving so we picked up some fast food and went back to the hotel. Moving out of San Antonio is proving more difficult than we thought because life outside a big city moves at a much slower pace. 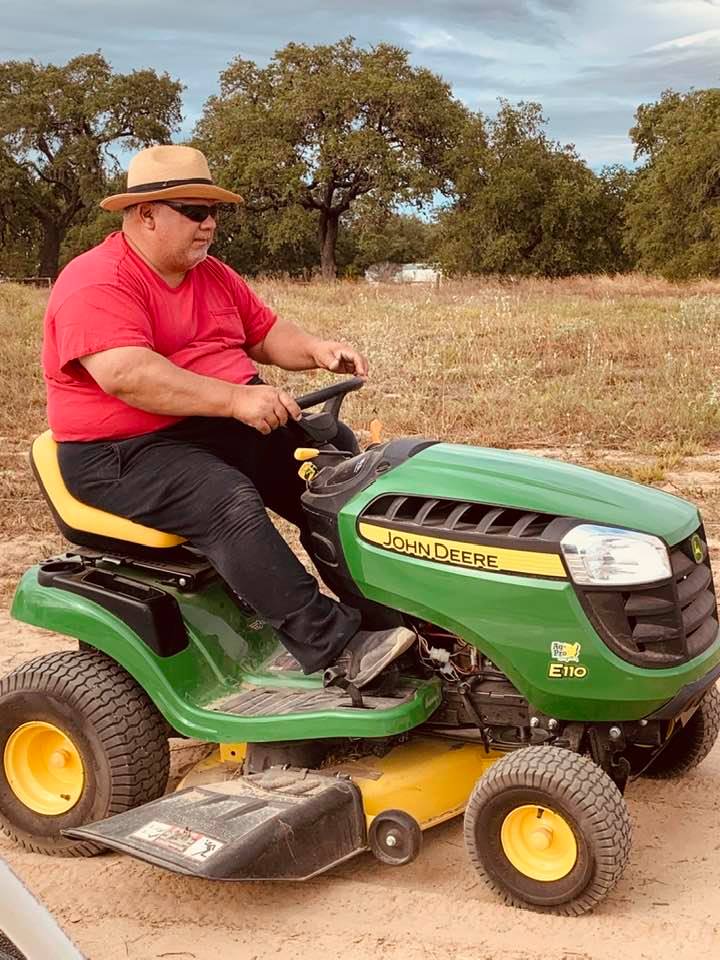 Return from Moving Out of San Antonio to Our Small Farm 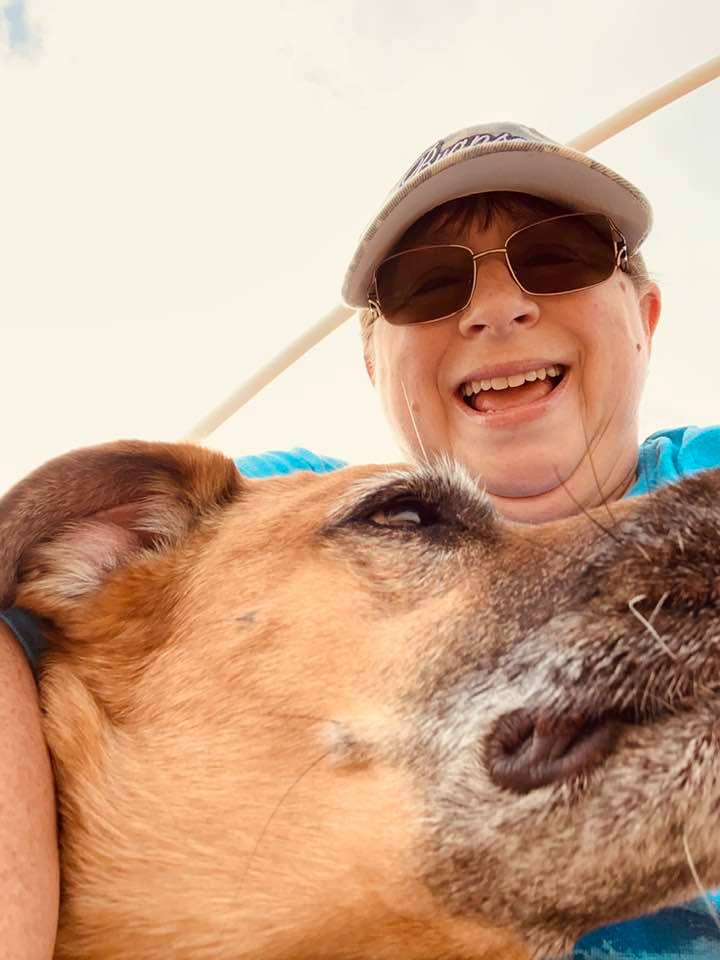 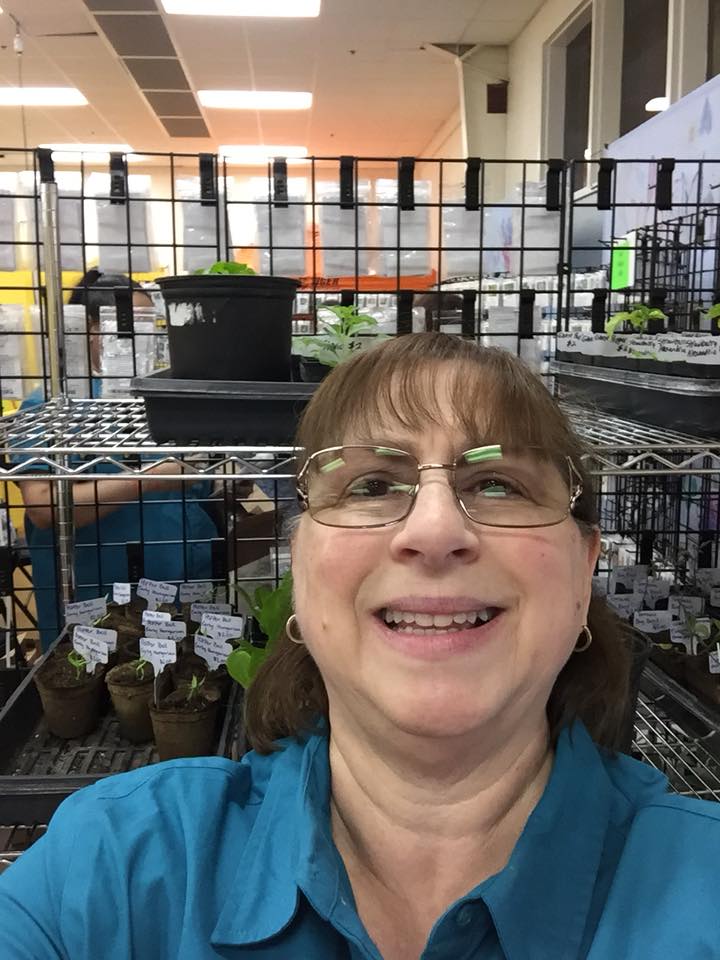 David's Garden Seeds® around the web: 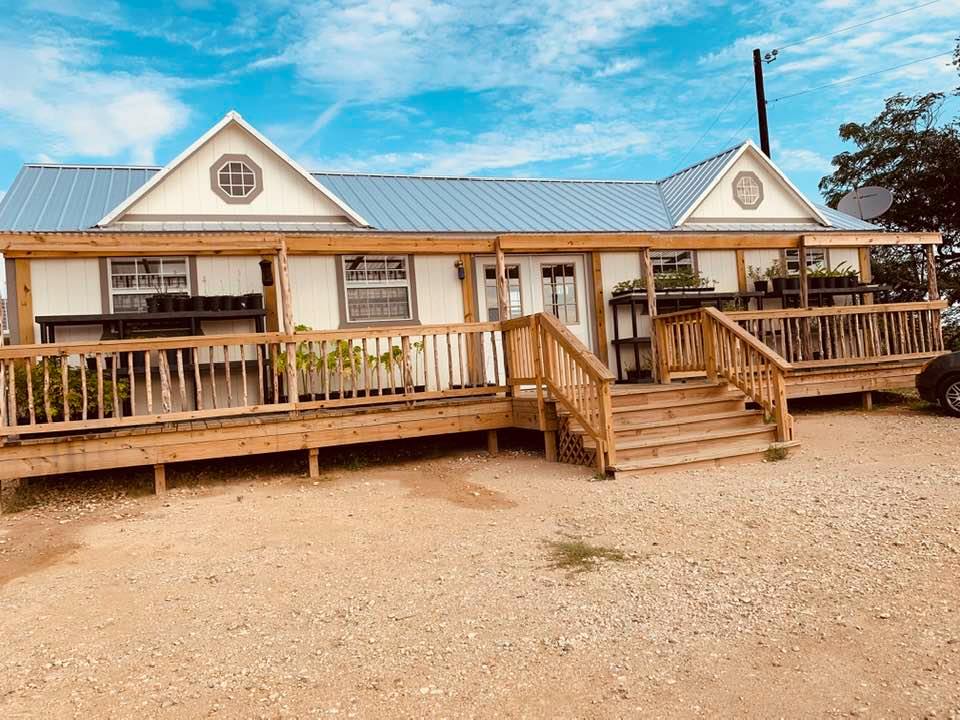 We have seeds for the backyard gardener, plants, chicken eggs, garden veggies & fruits fresh or  canned in our commercial kitchen depending on availability & time of year.